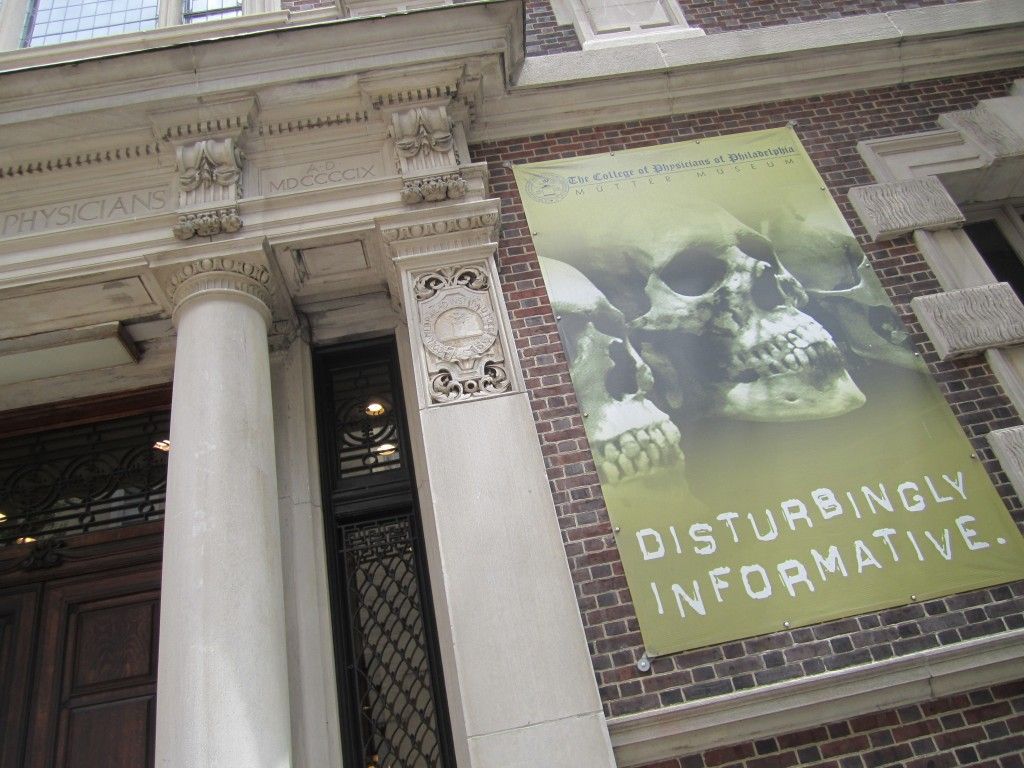 The Mütter Museum describes itself as “disturbingly informative”. Disturbing it certainly is.

Last summer we got invited to tour the Mütter Museum in Philadelphia. The Mütter is a museum of medical history, run by the College of Physicians of Philadelphia, the oldest private medical society in the United States, founded in 1787

The Mütter is a gallery of 19th-century specimens, teaching models, instruments, and photographs, as well as the Historical Medical Library, which is one of the country’s oldest medical libraries

The Mütter displays its beautifully preserved collections of anatomical specimens, models, and medical instruments in a 19th century “cabinet museum” setting. The goal of the Museum is to help the public understand the mysteries and beauty of the human body while appreciating the history of diagnosis and treatment of disease.

The museum was crowded the day we visited. There are only a few room son two floors with displays.

Warning: the Mütter Museum is not for the faint of heart. There are some seriously grotesque oddities in there. The only thing I could compare it to is that which I saw in St. Petersburg’s Kunstkamera.

The museum is best known for the Hyrtl Skull Collection and other anatomical specimens including a wax model of a woman with a horn growing out of her forehead along with several wax molds of untreated conditions of the head; the tallest skeleton currently on display in North America; a nine-foot-long human colon that contained over 40 pounds of fecal matter which originally came from a sideshow act called the human Balloon; and the body of the Soap Lady, whose corpse turned itself into a soapy substance called adipocere, better known as grave wax.

The museum is located at 19 South 22nd St. in Philadelphia, PA.

General admission is $15 but you can save money  by purchasing double admission ticket for both the Mütterand the Penn Museum for $20.

No photography is allowed inside.

Here are all my posts from Philadelphia.

Have you ever been to the Mütter Museum? Were you disturbed?